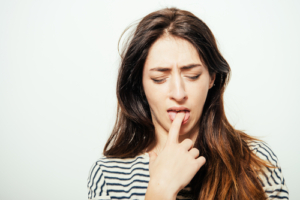 Many people bite their tongue while talking, chewing, or sneezing. It’s an incredibly common occurrence, although very painful. But did you know that people can bite their tongue in their sleep and not even know it until the next day? At our Austin dental office, we want our patients to know that nighttime tongue biting is quite common, and it may actually be a sign of something serious.

The symptoms of seizures include tensing of muscles, uncontrollable twitching, and yes, tongue biting. However, seizures aren’t necessarily only experienced during the day. In fact, someone can have no symptoms of seizures while awake and only get them while sleeping. These are called nocturnal seizures, and may be a reason of nighttime tongue biting. Treatment of nocturnal seizures usually requires medication.

Rhythmic movement disorder is used to describe the action of head banging and body rocking in children. These movements are typically noticed before naptime or bedtime. Due to the sudden jerks in the head and neck area, it’s common for tongue biting to come along with rhythmic movement disorder. Many times children will outgrow the disorder, but medication may be recommended.

Bruxism, the technical term for teeth grinding, can be a major problem. People who grind their teeth have a habit, although sometimes subconsciously, of clenching their jaw or fiercely rubbing their top teeth against their bottom teeth. When this happens at night, the tongue can get in the way. Bruxism can also be detrimental to overall dental health and increases the chance of broken or chipped teeth. To treat it, your dentist in Austin will probably recommend a night guard.

You shouldn’t have to live with the pain and nuisance of nighttime tongue biting. We welcome you to schedule an appointment at our dental office in Austin. We’ll work with you to see if teeth grinding may be causing your problem. If it’s not, we strongly recommend seeing your physician.

“I’ve known Dr. Broberg for a very long time and highly recommend him! He is not only an amazing dentist, but he is an outstanding guy and truly cares about his patients.”

“Dr Broberg is amazing. Been going to him for years and I always send my family and friends to him as well. He’s very thorough and makes you feel very comfortable. Try him out!”

“Exceptional patient care. Always on time with my appointments. I do not have to wait.”

“Going to the dentist is not usually a fun event, but I was excited to see Dr. Broberg as a patient. I had high expectations, knowing him as a person, and he didn’t disappoint as a dentist. He was great! His office is beautiful. His staff is so friendly. They make you feel like you’re visiting their home, not a clinical office. I was very impressed with the high tech dental equipment allowing me to immediately see my problem areas on the digital screen.”